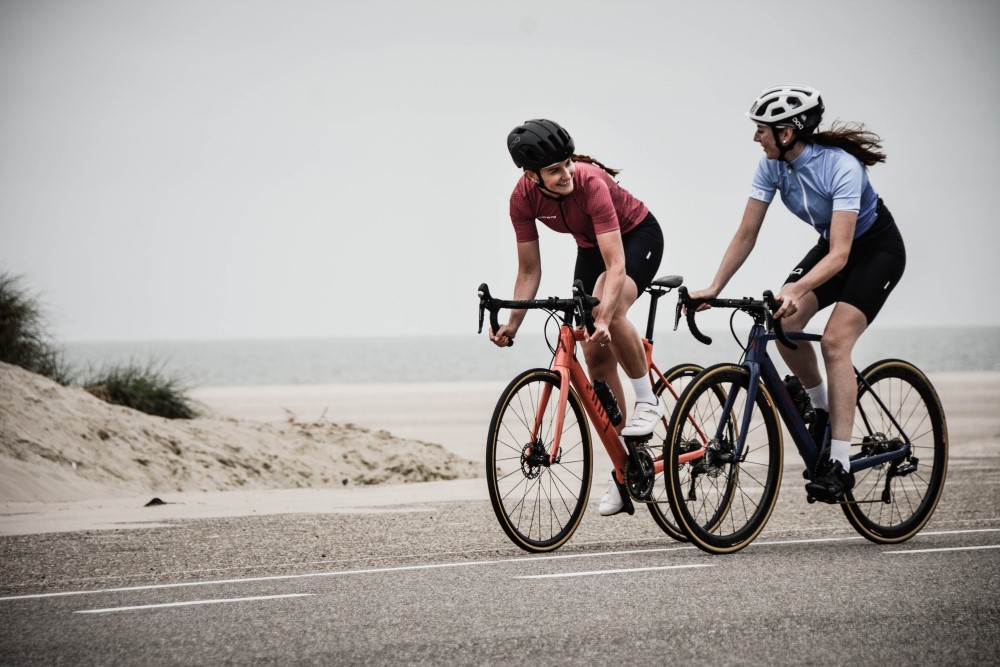 Taking your bike on a ferry

How to take your bike on a ferry holiday

Have you ever thought about taking your bike on holiday with you? A cycling holiday by ferry is a truly green way to travel, and it can also be an excellent way to save money as many ferries don’t charge foot passengers extra for taking a bike. Unlike planes, there is normally no need to dismantle your bike to box it up or wonder whether it will arrive from the luggage hold in one piece.

Travelling with a bike attached to a vehicle

The majority of passengers taking ferry holidays with bikes simply strap them onto their cars, caravans, or motorhomes on racks or in boxes. That means they can drive to any destination and cycle wherever they go on their holiday.  The pricing of taking bikes on a vehicle is simple – passengers just need to include the additional height and length of the vehicle when making the ferry booking.

It’s worth remembering that rear mounted cycle racks can obscure rear lights and number plates so car owners may need a lighting board with number plate and electrical supply to ensure their car and bike racks are legally roadworthy.

It’s easy to take a bike on a ferry as a foot passenger and cycle off into the sunset from the port. Passengers travelling with bicycles generally check in at the same time as other foot passengers. They dismount from their bikes for safety reasons and push their bicycle up the same vehicle ramp as that used by cars. Stewards will be on board to instruct cyclists. Once onboard travellers will be shown where to park and secure their bicycle on the deck for the crossing. It may be attached to the floor, wall or a railing for the crossing.

Brittany Ferries accepts bicycles for foot passengers for no additional charge.  Vehicles with bike racks attached are also accepted. Their video explains how to board the ferry with a bike.

Caledonian MacBrayne accepts bicycles with foot passengers free of charge on its multiple routes to from Scotland’s West Coast to islands from Arran to North Uist. Passengers travelling to the terminal by train will need to check with www.scotrail.co.uk to check if they need to book their bikes onto the connecting train service. Bike racks attached to cars are also free of charge.

DFDS accepts bicycles as part of a car booking for no additional charge on its routes between Newcastle and Amsterdam, Dover to Calais, Dover to Dunkirk and Newhaven to Dieppe. Passengers travelling with bicycles only can book a bicycle passenger fare. To find out more about how to board on a bike watch the DFDS video below.

Hovertravel accepts bicycles on the hovercraft free of charge, but they must be stored in their luggage/freight compartment on the inside of the craft. Due to space restrictions, bikes may not be booked on the craft; it is a first come, first served basis.

Bicycles are permitted on board all Irish Ferries crossings including Dublin to Holyhead, Rosslare to Pembroke and Dublin to Cherbourg. The price of travelling with a bicycle is £20/ €20 return. Bicycle racks attached to cars, provided they fit within the vehicle size booked do not have any additional charge.

Isle of Man Steam Packet Company allows foot passengers to take a bike free of charge. They operate regular ferry sailings to the Isle of Man from Heysham and Liverpool and seasonal sailings from Belfast and Dublin. Bicycle racks attached to cars, provided they fit within the vehicle size booked do not have an additional charge.

Isles of Scilly Travel packs bikes into a luggage hold and therefore must be booked in advance due to the limited availability of space. Bicycles are £26 return.

P&O Ferries accepts bicycles as part of a car booking for no additional charge on its routes between Dover and Calais, Hull to Rotterdam, and Cairnryan in Scotland to Larne, Northern Ireland. Passengers touring by bicycle can book a bicycle passenger fare. P&O Ferries doesn’t accept bicycles on its Liverpool to Dublin route.

Red Funnel accepts bicycles for no extra charge on its route from Southhampton to East and West Cowes.  It’s worth noting that bikes cannot be carried on the Red Jet Hi-Speed service because of the design of the ship unless they are of the folding type and carried in a purpose designed bag. Bikes attached to overhead bike rack on a vehicle can be carried for an additional cost if over 2.7m in height or are free of charge if under this height measurement or attached to the bike rack on the back of the car.

Stena Line accepts bicycles for no additional charge on its routes between Cainryan in Scotland and Belfast, Liverpool to Belfast, Holyhead to Dublin, Harwich to Hook of Holland and Fishguard to Rosslare. The is also no additional charge for bikes on vehicle bike racks provided the size of the vehicle is within the limits booked.

Cyclists can sail through the heart of London on the Uber Boat by Thames Clippers ferry services, stopping off regularly and sightseeing by bike from each pier.  Thames Clippers serve 24 piers across London, from Putney in the West to Woolwich in the East. Each ferry has space for up to 14 cycles on a first come, first-served basis at no extra charge.

Wightlink allows foot passengers to take a bike free of charge on routes from Lymington to Yarmouth, and Portsmouth to Ryde on the Isle of Wight. Its website site is also packed with tips about cycling on the island and cycle festival details. Vehicles carrying bicycles will be charged an additional cost if the bicycles add additional height or length to your vehicle – see Vehicle size guide for details.

In addition to checking out the cycling sections of each ferry members’ website there is some great advice for cycling routes from cycling organisations such as CyclingUK and Eurovelo.

We also assisted CyclingUK produce their own guide to taking your bike on the ferry.

Cycling rules of the road

We advise checking out the rules of the road in any international country before you set off. Each ferry member has lots of advice, but tips for cycling in France include the fact that a bike must be equipped with a bell, cyclists can ride two abreast in daylight but it’s mandatory to ride single file at night. Cyclists travelling after dark in rural areas must also wear a high visibility waistcoat.

Similar laws apply in Belgium and Germany, but side and pedal reflectors must be fitted, as well as white front and red back lights for use after dusk or in times of low visibility. In Holland all bikes must have a round red reflector on the rear, yellow reflectors on the pedals and white or yellow reflective tyres

In Germany and Holland, flashing LED lights are illegal. In some countres it may be essential to wear a crash helmet so please check the rules for the country you are going to.

Find out more about cycling adventures accessible by ferry.