Five animals you never thought you’d be able to see from a ferry!

The team from ORCA, one of the UK’s leading whale and dolphin conservation charities, give some inspirational insights into the marine life that can be seen in waters around the UK and Europe, from the ferry. 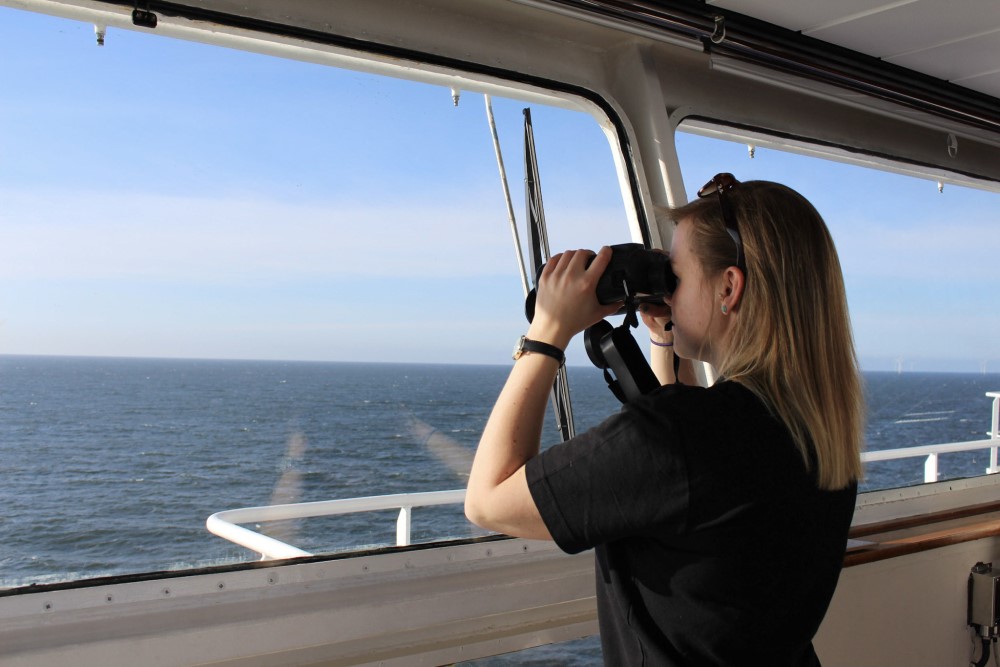 One of the absolute joys of being out at sea is having the chance to spot some of the incredible wildlife we have around the UK and Europe. ORCA have been using ferries to monitor whales, dolphins and porpoises (known collectively as cetaceans) for more than 20 years, and in that time we’ve had some sensational sightings that really stick in the memory.

We’ve compiled a list of five surprising species that you can see simply by stepping on to a ferry and enjoying the experience of travelling by sea.

Orcas, or killer whales, are a species very close to our heart. Not only are they our namesakes, but they are also one of the most intelligent and sophisticated animals on the planet. You might think you’d need to travel somewhere exotic to find these icons of the ocean, but in fact you can glimpse this unmistakeable species around the UK.

As well as regular sightings on the ferry between mainland Scotland and Shetland, we even have our very own resident pod. These animals are most commonly found in the Hebrides and can occasionally be seen from the Caledonian MacBrayne ferry network.

This group in particular is a crucial population that, unfortunately, is in real trouble. Toxic pollutants called polychlorinated biphenyls (or PCBs) have built up to record levels in these animals, and mean that they haven’t bred for over 30 years.

Known as the greyhound of the sea, the fin whale is the second largest animal on the planet, with only the giant blue whale larger. These baleen whales are filter feeders, using huge strips of keratin in their mouths like a sieve to consume vast quantities of krill and other small marine animals.

Fin whales can be seen in large numbers in the Bay of Biscay from aboard Brittany Ferries voyages to northern Spain. Their size (up to 27m) means they can be seen from far away even with the naked eye, meaning it is the perfect place to study them.

ORCA are using ferries in this area to learn more about their behaviour, with the aim of trying to better understand the threat of ship strike. Busy shipping lanes in other parts of the Bay of Biscay are putting fin whales at risk, so we are working with Brittany Ferries to better understand how we can reduce this risk by studying the animals we see.

Acrobatic and energetic, dolphins are always a crowd favourite and the beautiful striped dolphin is one we love to spot. Typically they enjoy deeper waters of 1,000m or more, where the fish and squid they hunt can be found.

Striped dolphins are also very social, both within their own species and with other dolphins as well. Hybrids are sometimes seen, with interbreeding with short-beaked common dolphins something recorded numerous times in the north Atlantic.

Striped dolphins have also popped up in slightly unusual places too – in 2017, an ORCA team recorded striped dolphins on the ferry crossing to the Isles of Scilly, the first ever recorded sighting of this species in the area.

Small, shy and very difficult to spot, the harbour porpoise is the most common cetacean in Europe but is one of the most elusive. They are only 1.5-1.7m long, and they are usually found close to shore, where they feed on species such as sand eels.

The harbour porpoise is the only species of porpoise found in Europe, and their small size and shy nature make them difficult to spot in all but the best conditions. The distinctive triangular dorsal fin is usually found heading away from the ship as these shy animals seek out peace and quiet!

Harbour porpoises in the North Sea are a particular focus for ORCA – they are frequently caught and killed by fishing nets in the area, which is why ORCA’s research has been used to help designate a “Special Area of Conservation” in the area to help keep them safe.

The sight of a breaching humpback whale is one that most people will have enjoyed in nature documentaries by the likes of David Attenborough, but it’s also one that very lucky ferry passengers can enjoy on occasion as well.

With the recovery of humpback whales after the ban on whaling, plus the incredible distances this particular species can migrate, we see them increasingly popping up in unexpected places. Visits to the cornish coast can be added to sightings in the Hebrides, and even the occasional encounter in the English Channel.

Of course, this increase in sightings presents its own issues – by moving closer to shore, the animals are at increased risk of being entangled in kreel lines holding lobster and crab pots. ORCA monitors humpback whales across Europe and beyond, and our friends at British Divers Marine Life Rescue are also on hand to assist any animals in distress.

Ferry travel is a wonderful way to appreciate awe-inspiring species in their natural habitat. We’re continuing to celebrate wildlife at sea on ferries across the UK network, so keep an eye out for teams at sea if you travel this year!