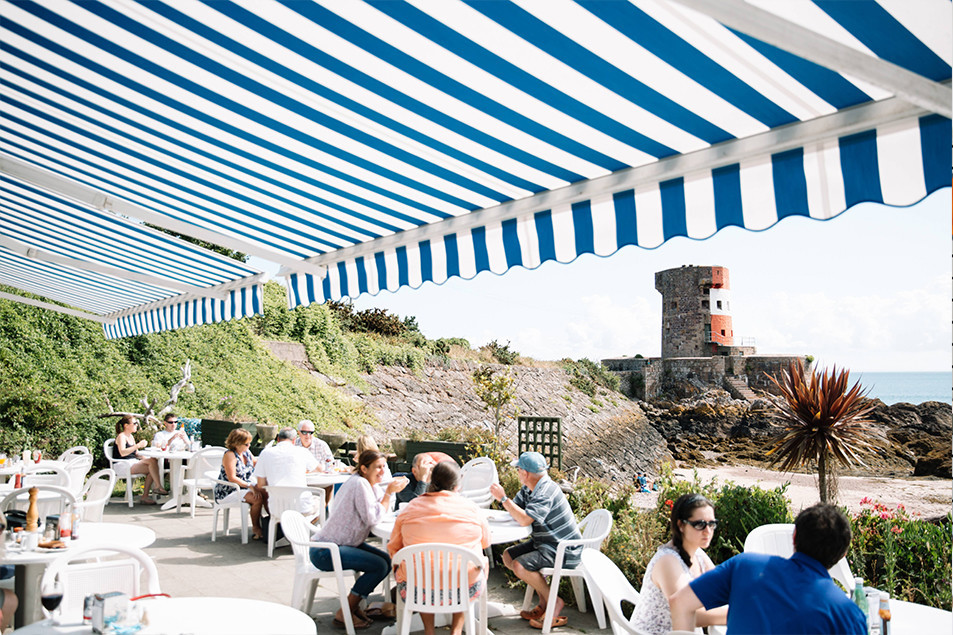 If a favourite part of your holiday is indulging in local cuisine, you are not alone. A survey* commissioned by Discover Ferries has revealed that almost two thirds (60%) of British holiday makers enjoy dining out on regional delicacies when they go away, with over a third (39%), citing that as their favourite holiday food. The survey also showed that our favourite holiday drinks are beer, wine and cocktails.

So, whether you like sampling seafood, waking up to waffles, or enjoying a wee dram of whisky, we have compiled our top ten foodie destinations you can reach by ferry.

Following on from Amsterdam City Hall’s decision in May 2019 to only serve vegetarian food as standard at city council events, it’s fitting that Amsterdam is our foodie destination for vegetarians. With more people choosing an organic and meat-free diet for their perceived health and environmental benefits, Amsterdam is a worthy destination for those committed to sustainability.

For the more adventurous we recommend trying Betty’s, in Rijnstraat in south Amsterdam. The 3-course ‘surprise menu’ is just that – a surprise. You let them know if there’s anything you don’t eat and wait to see what Gido has prepared you.

Of course, all foodie destinations in Amsterdam are best reached by bicycle.

DFDS – Sailing to Amsterdam from Newcastle

Stena Line – Sailing to Hook of Holland from Harwich

Sometimes overlooked as a culinary destination due to its bigger neighbours, Belgium’s proud food culture may come as a surprise to some visitors. Belgian beer, moules-frites, chocolate and waffles are well-known Belgian specialities, but they are far from the only  delicacies to tempt the gourmands among us.  The North Sea Coast, for example, offers diners treasures such as  mussels and grey prawn croquettes.  Ghent delights include Waterzooi, a creamy fish stew, and the sweet and sour flavours of Flanders beef stew, which comprises beef slow cooked in beer. Originally from Wallonia, we recommend trying Ardennes ham, meatballs with a rich stock and Liege syrup (a sweet, sticky brown jelly made from evaporated fruit juices—dates, apples, and pears) and Tarte au Riz, a sweet flan filled with a custardy mixture of rice and milk and glazed with egg.

As Britain’s favourite holiday drink, we thought we should mention that Belgium is home to over 800 varieties of beer. We holy recommend trying the Westvleteren 12, considered by some to be among the best beers in the world. Westvleteren beers are sold in small quantities on a weekly basis from the doors of the Trappist Abbey of Saint Sixtus.

Brittany’s most famous export is the crêpe, and we suggest trying the original version. Traditionally made from buckwheat flour, they come in both sweet and savoury versions (galettes).

When it comes to fresh vegetables, Brittany is a key producer of artichokes and onions on the land and seaweed in the sea. People have been collecting seaweed along the Finistère coast for centuries and many local dishes have a seaweed twist.

Two of the most important ingredients in French cooking, butter and salt, are made or harvested in Brittany. The salt marshes of Guérande, which cover over 2,000 hectares of land, is famous for its course sea salt (gros sel) and sea salt flakes (fleur de sel), which are both harvested from June-September.

This part of northern France is also well known for its buttery delights, including a plethora of cakes, pastries and biscuits special to the region. Famous Breton pastries include the kouign amann (“butter cake” in Breton) and the far.

DFDS – Sailing to Calais and Dieppe

Guernsey’s gastronomy is a unique fusion of flavours, combining the French love of seafood and the British love of creamy milk. Local delicacies to look out for are Ormers, a mollusc resembling a flattened sea snail, that has an almost meat-like taste and texture and can be found in the restaurants around St Peters Port from January to April.

The island’s signature cake, Guernsey Gâche, is a fruity bread made with sultanas, raisins, and orange peel, and best eaten with Guernsey’s creamy butter.

When it comes to dairy, Guernsey cows are regarded as producing the most delicious milk in the world. Not only is it super-creamy, but Guernsey milk is also said to have great health properties, containing 12% more protein and three times as much as omega 3 than regular milk.

Condor Ferries– sailing to Guernsey from Poole, Portsmouth and Jersey

When people imagine Irish food they often think of a dish with potatoes, and it’s true that the potato has a special place in Irish cooking. From Irish potato bread (or farl), which is a staple of a Northern Irish breakfast, and Colcannon, made with mashed potatoes, kale or cabbage and butter or cream, to the simple potato galette, which involves pan-fried potatoes in butter.

The potato in its many forms also provides the perfect accompaniment to Ireland’s other delicacies, such as grass-fed beef, Lee-river salmon, drisheen (a type of blood sausage) and battleboard, a salted ling fish often eaten on Fridays.

A trip to Ireland would not be complete without experiencing the local Guinness, said to taste different in its birth country than its exported namesake, and a dram of single pot still Irish whiskey, a uniquely Irish form of spirit, made in large copper stills, using a mix of malted and un-malted barley and triple-distilled.

As you would expect from an island, seafood is a key ingredient of Isle of Man gastronomy. Whether it be the national dish, Queenies (known elsewhere as queen scallops), sourced locally in Manx waters, or kippers (herring smoked over oak-chips in a centuries-old tradition).  More unexpected is Loaghtan lamb, from the rare-breed Manx Loaghtan sheep who have four, or sometimes six, horns. Their meat is considered a delicacy, being more gamey and lower in fat than regular lamb and found in shops and restaurants around the island.

The speciality that Manx people are most proud of, however, is their award-winning cheese from the Isle of Man Creamery. The cheese travels no further than 15 miles from farm to store, and products come in all varieties.

Getting to the Isle of Man

For many a visit to the Isle of Wight is like going back in time and conjures up memories of sticks of rock and tea rooms, however the island’s food scene has changed dramatically over the last fifteen years since chef Robert Thomson won the island a Michelin star at The Hambrough. As all chefs will tell you, the secret to great tasting food is fresh, quality ingredients. Local island specialities include: tomatoes from The Tomato Stall, grown in perfect conditions; The Isle of Wight Cheese Company, whose multiple award-winning Isle of Wight Blue is mild, incredibly creamy, with a beautiful blue rind^; garlic from The Garlic Farm, which grows multiple varieties of garlic, sells garlic-inspired products and holds culinary workshops throughout the year.

English wines, particularly white and sparkling varieties have been winning international awards in recent years, even beating established French rivals. The Isle of Wight has two vineyards Adgestone, one of the oldest vineyards in England whose award-winning Dry Wight should not be missed and Rosemary Vineyard, whose founder is also behind the popular Mermaid gin from the Isle of Wight Distillery.

Getting to the Isle of Wight

Hovertravel – sailing from Portsmouth to Ryde (foot passengers only)

London’s food scene is well established and enjoys a reputation for being among the best in the world – both in terms of fine dining, but also in terms of the variety of international cuisines available. The capital’s rich and diverse cultural heritage is reflected in range of authentic culinary delights on offer, from Vietnamese in Shoreditch to Turkish in Harringay, Portuguese in Vauxhall, Chinese in Chinatown and curry in Whitechapel.

For those wanting to experience something more locally sourced, Borough Market and local farmers markets offer artisan products from small producers around the UK and beyond.

London has re-established its place as a top brewing location with local craft breweries popping up all over the city. One of the most well-known of which is the Meantime brewery in Greenwich, which offers tours, tastings and brewing masterclasses.

Getting around London by ferry

Uber Boat by Thames Clippers – run the River Bus service on the Thames from Riverside Barking in the east to Putney in the West.

Normandy has a rich culinary heritage. One of the most loved specialities of this part of northern France is neither beer nor wine, but in fact the humble apple. This highly versatile fruit forms the basis of delicious desserts such as  apple tarte tatin, or, for those wanting a more adult twist, it is also the key ingredient in the formidable local cidre or calvados, which can be enjoyed either as a refreshing drink or a delicious ingredient in a regional variation of that other French classic, moules-frites.

For lovers of seafood, Normandy is the chief oyster-cultivating, scallop-exporting and mussel-raising* region in France, with clams, cockles and lobster also in plentiful supply. Many local restaurants create their own special version of a classic seafood platter, which are perfect as a sharing dish when dining with friends or loved ones

Also not to be missed are the Normandy soft cheeses: Camembert, Pont-l’évêque, Livarot and Neufchâtel, all of which have AOC (appellation d’origine controlée) certification and are available in the local shops, restaurants and farmers markets.

DFDS – Sailing to Calais and Dieppe

Brits may joke about the deep-fried Mars bar, but Scotland has long established itself on the culinary map with household brands such as Scottish smoked salmon, Aberdeen Angus beef and Scottish malt whisky.  Oban is the seafood capital of Scotland, offering the finest fresh lobster, crab, scallops, monkfish and oysters. Game, such as vension and grouse, is a speciality when in season, and no trip to Scotland would be complete without trying haggis with neeps (turnips) and tatties (potatoes).

Undoubtedly Scotland is most famous for its whisky and whether you’re visiting the islands (Arran, Campbelltown, Islay, Jura, Mull, Skye) or the mainland, you have plenty of opportunity to get into the national spirit.

Getting to and around Scotland

Caledonian MacBrayne – serves the islands off the West Coast of Scotland

Whatever your food and drink favourites, the great thing about taking your car and a ferry is that you can bring back some of your favourite holiday finds to enjoy when you get home.